Section on magnetizing the UCM Frigates has been added to the Building section of the blog.
Posted by Ender at 2:13 PM 2 comments

If you haven't noticed, there are now two new sections in the tabs above. After I received my Dropfleet Commander ships, I wanted to document my experiences in both assembling and painting the various factions. The information that is out there for painting these ships is somewhat disjointed and tends to focus only on one faction. Information on magnetizing is more readily available, however, they mostly focus on cruisers and there are no instructions on how to magnetize the Shaltari. I wanted to create a section that documents my experience in magnetizing, building, and painting these ships so they can serve as a reference for both myself and others. Currently posted are experiences in magnetizing and painting the Shaltari, PHR, and Scourge frigates. Entries on the UCM and larger ships are forthcoming.
Posted by Ender at 11:50 AM 0 comments 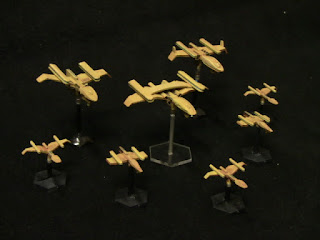 I've always liked the ships from Studio Bergstrom. The have a unified design aesthetic and are reasonably detailed. I've had these ships for a while, however, never had a chance to paint them until recently. They started out with a grey base coat followed by Yellow Ochre. A wash of Barn Red was applied followed by drybrushing with yellow ochre to bring out the details.  Engine glow was painted using a combination of blue and light blue. 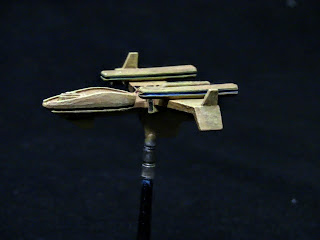 The greebles were painted with gunmetal with yellow ochre drybrush, red, and copper. Overall, this was a straightforward fleet to paint with some nice details. 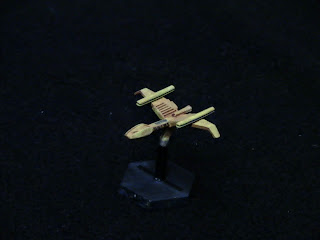 I had fun painting this fleet. I'll need to try out some of the other ships from Studio Bergrstom in the future. Additional pictures are in the gallery section.

I recently received some ships from Dropfleet Commander. Given the level of detail and extreme customization than can be performed with these ships, I decided to document my experience with magnetizing and painting these ships. The first entry is now up (Shaltari frigates). Again, any comments or criticism is appreciated.
Posted by Ender at 3:17 PM 0 comments 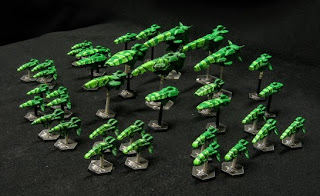 Here is the Mauridian fleet from Ravenstar Studios Cold Navy line. I decided to go with a green dazzle pattern that was based on the original drawings of the Marudian fleet. A close up of one of their battleships his here. 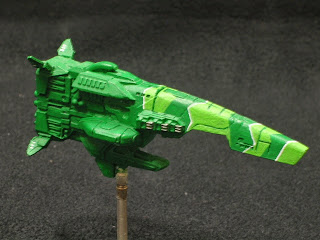 The ships themselves are well cast and easy to assemble. The ships look sleek and aggressive and were fun to paint. The main difficulty was painting the white stripe of the dazzle pattern (my eyes and hands are not as sharp and steady as they once were). 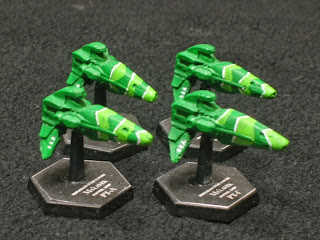 According to the fluff, the Mauridians emphasize small ships over large, and that is reflected in the sheer variety of frigates and destroyers that this faction has. The numbers and dazzle pattern makes for an impressive looking fleet. Additional pictures can be found in the gallery section. Again, any comments or criticism is appreciated.
Posted by Ender at 10:12 AM 1 comments 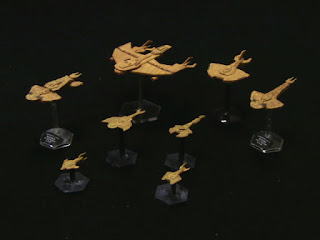 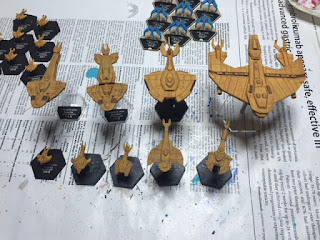 Again, in front from left to right are the Hideki, Sartan, Damar, Legate, Vasad. In the back from left to right are the Galor (Bergstrom), Kheldon (Bergstrom), Rasilak, and Bralek. The additonal ships fill out the fleet rather nicely. I'm debating whether to make a Hutet, however, there are enough ship classes to create a reasonable fleet. Please see the gallery for more photos. Ships are available for purchase.
Posted by Ender at 3:04 PM 0 comments 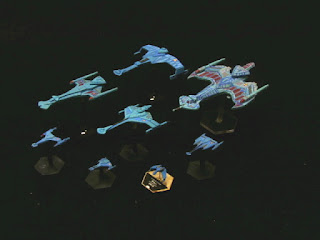 Some new ships arrived on my painting table. The Klingons now have some reinforcements to expand their fleet. In Star Trek Canon, the only official ships were the Negh'Var, Vor'cha, K't'inga, and B'rel (I'm ignoring the K'Vort as this is a scaled B'rel). This gives the Klingons a small frigate, an ancient destroyer, a cruiser, and a dreadnought/battleship. Since some of these designs have been in use since the TMP era, I wanted to modernize the Klingon fleet and include ships that could have been built during the TNG era. The results are what you see above. A top view shows the relative size of the ships: 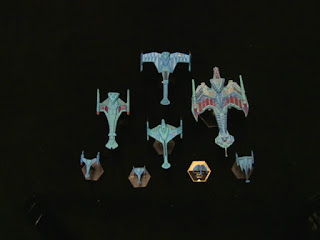 The ships from left to right, front to back are: Kel'Var destroyer, Qa'cheng frigate, B'rel escort (Romando), Riskadh heavy destroyer, Goralis cruiser, Bortas battlecruiser, Negh'Var Battleship, and Keth Ke Se Battlecruiser. I view the ships as 2 generations, the B'rel, K't'inga, Riskadh, Goralis, and Keth Ke Se in the generation just preceding the TNG era and the Qa'cheng, Kel'var, and Bortas are the contemporaries of the Vor'cha and the Negh'Var. All ships (except for the B'rel) are listed on the "Ships for Sale" page. Additional views can be seen in the gallery page. 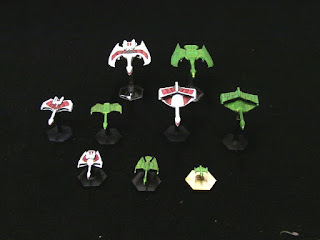 Managed to get additional Romulans built and painted. Here they are next to the original Romulans painted in a TNG color scheme. The new Romulans are painted to mimic the painting scheme for Star Fleet Battles Romulan miniatures. Here is a close up of the T'Korex heavy cruiser. 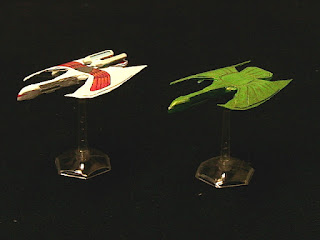 The SFB pained T'Korex has been upgraded to a heavy command cruiser variant. You can see the addition of upper engine pods. the underside has a bridge which is not visible on this view. Here is a picture of the underside: 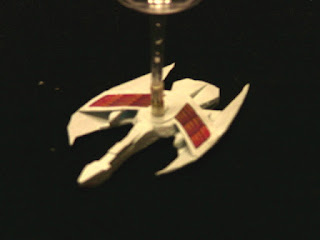 The bridge is more visible on this view. All the other Romulans have, except for the V'Tir light cruiser have extra components to allow upgrading. Additional pictures can be seen in the Romulan Gallery.

Ender
My own corner of the web for displaying completed miniature starships. In addition to collecting and painting commercially available ships, I also create my own either to fill gaps in my collection or there are no commercially available minis for that starship and one should be made (because the ship is too cool to exist without one).